It’s no longer a secret, that my assistant runs this blog on my behalf… Let me clarify that. I am not writing these words. I haven’t written this sentence either.
My – unpaid up until now – internet activities assistant is doing it for me. I simply don’t have time for that as I’m usually busy with scrambling out of trouble that I constantly get myself in.
It would also be difficult for me to concentrate to write something by myself. I have terrible problems with concetrating and not just with that… Besides, I have no internet connection. Because I don’t have it at home. Becouse I don’t have a home and even if I did, my Macbook Pro, that I got as a gift from European Union, isn’t working.
It broke in Norway, when I lived in a tent in Oslo because I couldn’t afford a room. Anyway you know the story if you’ve read my previous posts. I mean not my posts, but my assistat’s: let me remind you, she is writing this article for me. What was I saying? Yeah. The computer isn’t working. I’m really worried. It soaked in the tent and you can’t turn it on. 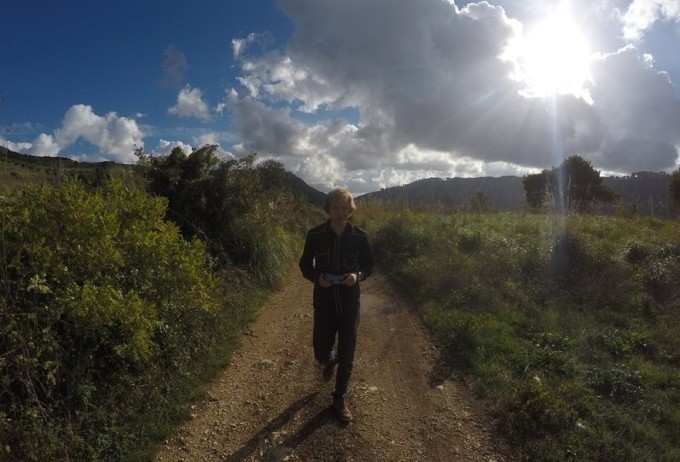 I’m now on Sicilly, living on a village and helping as a volunteer for food and shelter. There used to be this Liboryo guy here and together we tried to fix this Mac, but with no luck. It’s many strange people passing thru this place. Most of them are strongly addicted to weed. I dont like that. Once we hosted group of musicians- the girl was from Brazil and her Pakistan boyfriend. There was also Italian violinist so I created a simple music video of them to shere this moment with you.
Don’t ask me how I ended up here, it’s really a long story and now that I have to pay my assitant, I can’t afford to tell it. I have already payed for this article from the money I gain in France on picking grapes. It was 3 euro for 4 thousands sings so I need to be concise. Kurde… now I’m thinking that again I’ve spent last money in a stupid way. She is going to write some stupid stuff again and this article is going to suck just as the previous ones which she probably wrote drunk.

I digress too much. Back to the main point. I am on Sicilly, and honstly, despite decent weather and the beauty of surrounding nature, I would prefere to get out of here and change the situation into one in which I could earn money and decide by myself what I want to eat and who I want to hang out with. Sometimes working here for free I feel like a regular slave, especially since I don’t really have anywhere to escape to and I don’t have much money for the move. That’s why everyday I wake up and work here almost completely for free. Well, almost for free, because I do get food and shelter. I do various things. I clean a lot, feed the animals and since the olives picking season is coming, I cut the branches of the olive trees so that you can put the net on them. Sometimes I even bake bread.

But honestly, these are not my dream activites. I would really want to report the weird situation and places which I keep getting myself to. And get money out of that. Preferably, intriguing film reports, but could also do photos or articles. I even believe slightly that I will succeed one day, so I already started this blog http://www.pawel24.com, which now looks as it does, but maybe in the future it will take off properly… I mean so far my assistant is running the blog for me, but anyway it’s mainly my thought and reflections even if she adds some bullshit  of her own.

I can’t blame her, as she wrote all the previous articles for free and she won’t make much money on this one either. And it is possible that this will be the last article, because I really can’t afford to pay her. She can be demotivated and not really try to write well. So here I would like to ask: could someone please sponsor her? She takes 2 EURO per hour. If someone would like to help me on that, please email me: pawel.byra@hotmail.com. Also, You can support my project by buying USLESS CARDS.
I have few new models and they are cheaper then those for Norwegian market.

Optionally you can donate on this crowfounding  campaignan wich I created and all the money will be spent on my assistant’s salary.  Generally it would be good to have her full time, so that she would help via Skype with other stuff, like the escape from Sicily for instance. Shering this post with Youre friends it is also a great help for me.

In Poland an assistant like that costs 2 euro per hour, so in order to pay her for the first experimental month of working 8 hours per day, five days per week I would need to collect 320 euro. Its seems to be a lot what I’m asking Universe this time but also I know that many of You are willing to support me in my ridiculous ideas so I strongly belive that this one is gonna succeed. Then we will see what will  happen next.

Her name is Kasia and she is a third year literature weekend student. She’s very talented and also very pretty.